Saturday night RK Speed will host players, officials, spectators, and all others gathering around the sevens spectacle for barbecue dinner, live music, and a fun night. 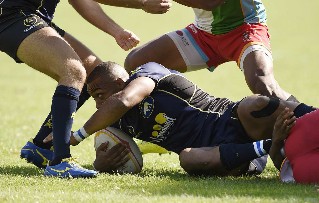 Space for camping in tents is available nearby the clubhouse.

For those who will stay in tents we can arrange breakfast Saturday and Sunday morning. Car parking, use of electrical equipments and use of open fire is forbidden in the camping area.

Food and beverages may not be brought inside the club house/party area.

Other possibilities include the 3 hotels close by the club.

The age limit for players in the men’s tournament is minimum 18 years, for women it is minimum 16 years and for old boys the minimum age is 35. If a team wants to participate with younger players, an exemption is required.

Matches are played according to the international 7­a­side rules.

Players can only play for one team. If a team, due to injuries, is in lack of players, the team will be allowed to use players from other teams, but only from teams who have left the tournament and are not in a higher ranking tournament. Players willing to play for other teams must register with the committee, who will allocate them to teams.

A squad may include up to 12 players.

The SO7 a­side match committee is the highest authority during the tournament.

RK Speed will arrange referees from Great Britain, but if a team has a referee on the tour to Copenhagen, he/she will be welcome to referee. Please give notice to RK Speed as soon as possible on the entry form for match planning.

First­-aid personel is available during the whole tournament in case of injuries.

The tournament is organized under the Sports Confederation of Denmark (DIF), which means that Anti Doping Danmark may make official doping tests of all players during the tournament.

In pools 2 points are awarded for a win, 1 for a draw and 0 for losing.

Copenhagen Scandinavian Sevens is played at